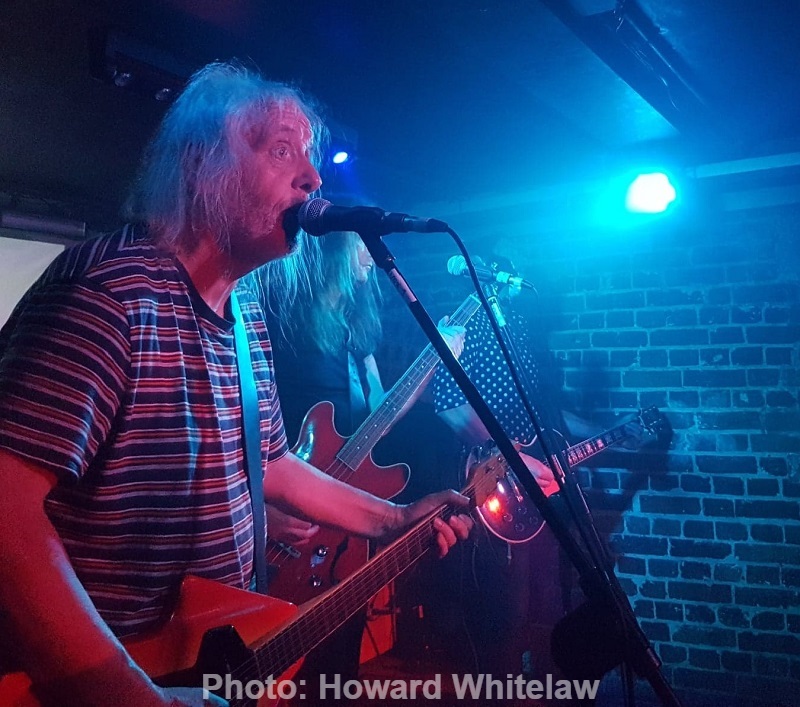 Nick Saloman (‘ZZ Nick’) and his band “The Bevis Frond” at The Crypt, Hastings, 10 July

No, I don’t know where the band’s name comes from either and the HUWFC nickname is ludicrous; “ZZ Top” ain’t one of the influences. A comment below an exquisite album on YouTube describes him as a “neo-psychedelic Renaissance man” which just about does the breadth of talents justice.

Unlike QPR’s friendly against Crawley yesterday (a 3-3 game of two halves with two separate teams seemingly taking the field for the Super Hoops), Nick was wonderful from the first note this evening.

You could have made a good team out of squad players attending. Nutkin in goal, Doc Dyer and John Martin (a late arrival dressed in dapper brushed denim from head to toe) defending, with roving commissions for Chairman and Beaky. Just as you’re looking for your final man, Phil Burmingham emerges out of the gloom in pristine white. Mick Davies, also of Bexhill, circulated throughout the venue extending beatific smiles on us all.

Enlivened by some zero-percent Peroni, Nutkin bopped about for a little while but was moving like Massive Mark in his boot contraption. Chairman reserves his fancy footwork for in the hole in front of Rusty and was pretty much stationary. The elegant Mrs Martin did some sedate headbanging, Carole went full-on throughout and was mirrored at times by Mrs Beaky who has some smart moves.

There was more feedback than Bob Dylan and Tom Waits trying to talk to each other on a poorly tuned ham radio. But this is deliberate, a band trademark and deffo not due to technical flaws. It’s generally all very melodic and for electric guitar the chords are wonderfully lush. Yes, it’s very loud but always harmonious. If I can’t hear all of you when you scream for the ball on Wednesday, I’m confident that the dulcet tones of uber “Frond” fan and fellow QPR diehard John Dyer (purring contentedly as he watched his mate while seemingly drinking only lemonade) will still penetrate my eardrums.

“Harsh words in the turbine hall” is a lyric I heard, and I can only think that Nick is reflecting on a hairdryer half-time team talk from Rusty at an indoor game. Plenty of football in Nick’s between-songs chat, and there were gags about Paul Merson and self-belief.

A Roy Lichtenstein-ish film featuring vintage airmen played stage right with themes including the album “Vavona Burr” which has an airman on the cover. There were two animated line art films running as well as multiple camera men shooting yet more footage presumably for the documentary. Who will make it into the final version from the filming at the Academy?

So, what are the influences? What’s he like? Well, given that people queue up to do covers of his compositions he must have an original approach and his own distinctive style. When he relaxed, I heard a smattering of Lou Reed and like Reed (there is also a little of the equally poetic Paul Weller from early “The Jam”) the words really mean something. And throw in a little Jimi Hendrix. Very modest, Nick allowed himself to say that if people cover your songs and you think those artists are themselves pretty good then you must be doing something right.

“I’m still out there missing sitters and writing heartfelt songs” is a lyric from “Little Eden”. Heartfelt songs certainly but I can’t remember Nick missing a sitter ever (certainly not in front of me) and we’re lucky to have this man in the club. Yes, it was like a Turkish bath this evening in The Crypt (no sign of Hassan or Oh My Cod!) but let’s do much better in terms of turnout the next time he plays!

Following this morning’s league match, a reduced number turned out for training at Les Academias Decrepidos. But – nevertheless, it was an […]

The Inaugural 1066 Tournament between Brighton and Hastings Walking Football clubs was won by Brighton Greens. But there was a super team […]