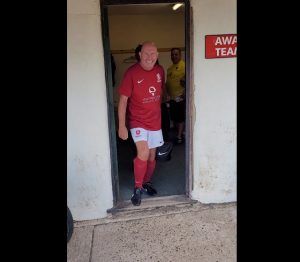 The lads were 40 minutes from glory.

Two halves of football away from a quarter-final cup tie in only our second year in the national walking football cup.

But lurking between us and a possible away tie with Carlisle United was the hulking behemoth that is Woodnesborough FC – our bogie team.

Last time we went there we got stuffed 6-1 and Ricky was busier than an ice cream man on Hastings seafront. This time we were hoping things would be different and they undoubtedly were but we were without Russ, Massive Mark, Cookie Monster and Blakey.

Now, if anyone thought we were fielding a second team they would be wrong. Such is our squad depth that we put out a side that would have beaten any of our local opposition with or without their ringers.

We lined up with Rick in goal, El Jay and Wondy at the back, Peruvian Mick and Beaky in midfield and Deadeye Chris up front. Chairs was the extra man ready to come on at a moment’s notice.
El Jay adopted the Coach role, taking 90 per cent of Ricky’s rollouts and setting us up from the back. Beaky was a revelation: this outwardly quiet Fairlighter was a demon in midfield, taking the ball from Jay and holding it up or taking on his man with a deft turn. As a competitive debut it was superb to watch. Up front, Deadeye prowled waiting for service and – although he wasn’t on the recent exhilarating form he has shown, he looked dangerous and hungry for a goal.

The story of the game? The Woodmen came on strong from the start and Harry Kane’s dad blasted his first chance high over the fence, let alone the bar. Was it a portent of things to come? We held our own under a barrage of pinged passes for eight minutes until Jay was caught in possession and Daddy Kane scored high to Rick’s right. 1-0.

Chris got his first chance on ten minutes but shot narrowly wide and two cross-field balls from Jay just escaped his control. He was our target man but we couldn’t hit him often enough. The Ws’ next break was alarmingly good. A little specky bloke took the ball on his own D, beat three United players and shot narrowly wide. El Jay was scowling and shouting with incredible commitment and he and Magic Wond linked well together at the back.

On 14 minutes Chris had his second chance well saved by the Woodnesborough keeper and a minute later turned and shot just wide. We were still in this game. Jay deflected a powerful shot wide and Ricky made a super stop down to his left. It was just 1-0 at the water break.

But the home side took advantage of the three-minute blow, Rick saving well with his legs direct from a corner and then doing enough to put Specky off who chipped over when he should have thumped it. Just a minute before half time Jay was caught again – VAR might have had something to say about the challenge – and BANG! it was 2-0. Furious with himself, the Spanish bun boy, hustled forward and shot just wide seconds before the whistle. 2-0 half time.

Chair’s half time talk was simply this: we are still in this game. No point being defensive, play 1-3-1 and let’s get a goal.

A lovely through ball from Mick saw El Jay skim the crossbar with a thunderbolt that had their keeper beaten all ends up. The Ws’ had another shot just wide and then forced a fine save from Rick on 24 minutes before Mick and Beaky combined pushing forward with a lovely one-two ending in a narrowly missed chance. We were definitely in this tie but pushing forward left gaps at the back and the Woodmen’s third was a one-touch, three-pass wonder to behold. 3-0.

The Hastings heads refused to bow though and on 28 minutes Chris held the ball well and put Jay in on his favoured left side. He stroked in a beauty. 3-1 Dare we dream? Could we come back? It wasn’t to be: with so much going forward it was inevitable that the home team’s passing game would pay off and it did with Mr Kane senior beating Rick at his left post despite getting a full hand on it. 4-1

It was only a matter of time before Deadeye was going to take his chance, and his shield, turn and shot was a fine reward for his hard work. 4-2

When Harry’s dad completed his hat-trick it was all over bar the doorstep sandwiches in the bar. It finished 5-2 and that score line flatters the Ws’ who were shocked by our resilience and refusal to lie down.

At the end there was lump in Chair’s throat, a catch in his voice and a tear in his eye as he told our warriors how proud he was of their efforts. Well done lads – this time next year?

Man of the match: every man deserves it. You were all excellent but it’s Beaky who gets the nod. Outstanding contribution. Tough as old boots and skilful with it – what a great signing he is for the club. 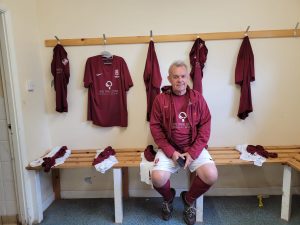 Can anyone remember a centre half scoring a hat-trick? It’s probably been done before but not at Hastings United Walking Football. […]

The Hornets were exterminated tonight by Burwash in a mid-table championship clash. Playing away in a Robertsbridge sports hall, the Hastings lads […]

Hastings United are the Premiership champions. They won the Age UK East Sussex league title with a four-nil demolition of Eastbourne Borough […]